Results demonstrate the continuation of the high-grade upper (“hanging wall”) vein down-dip from the previously reported reverse circulation (RC) drill holes. Similarly the stockwork mineralization below (footwall) to the HW vein continues.  Results are reported below.

Assays are pending. Hole PC22-91 was drilled from the same pad as the holes reported above to test the down-dip continuation of the mineralization encountered in PC22-88. The hole was drilled after the two holes were completed on the Shark Fin target. 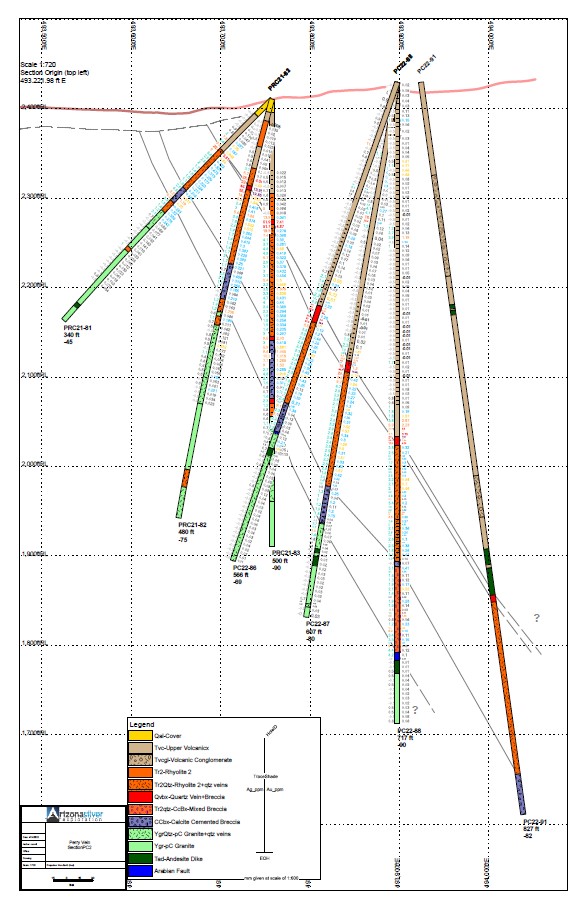 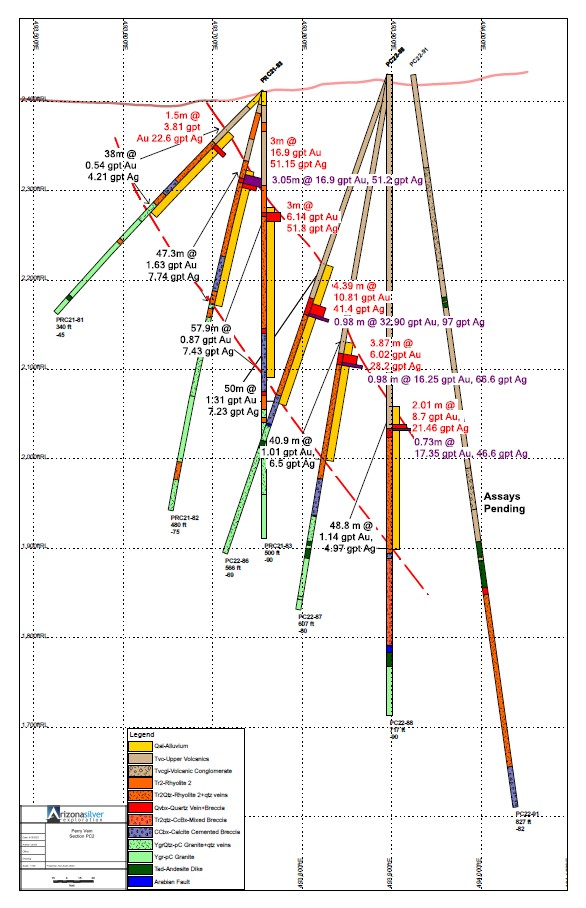 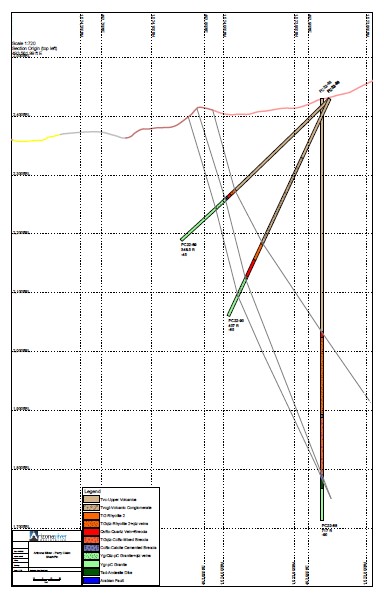 Greg Hahn, VP of Exploration,  gives an overview of the results from the first 3 drill holes of the 2022 Drill Program 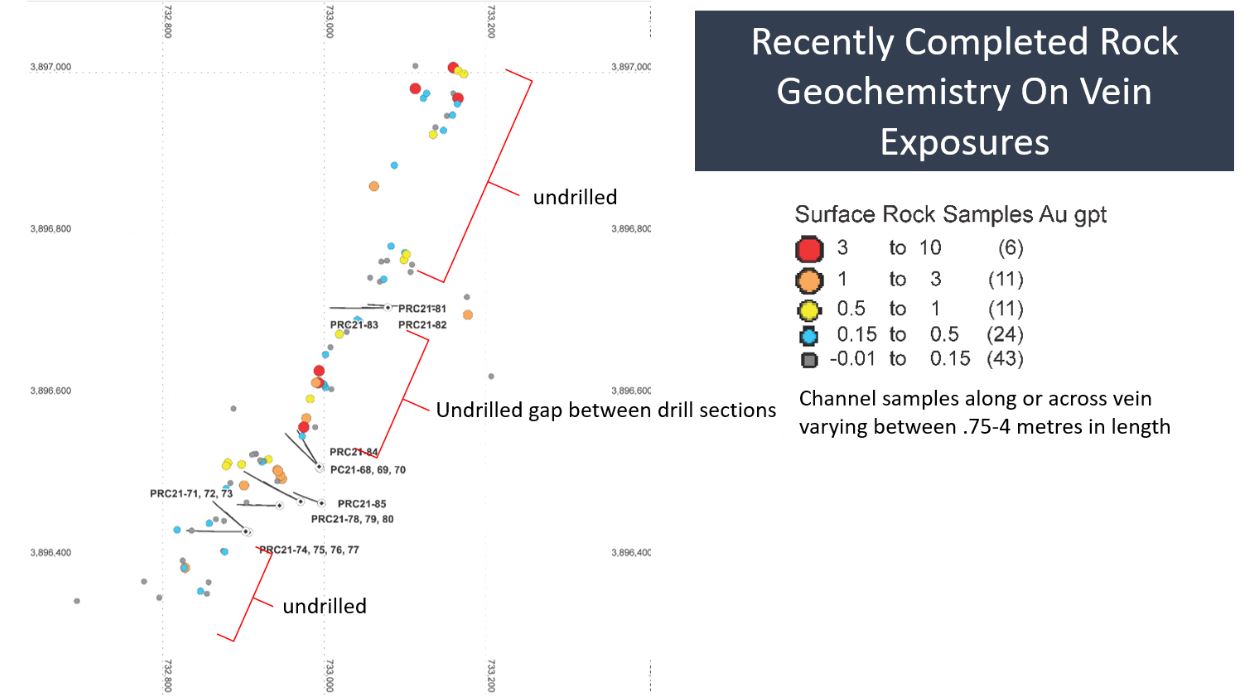 Highlights in the Main Vein (6 holes) 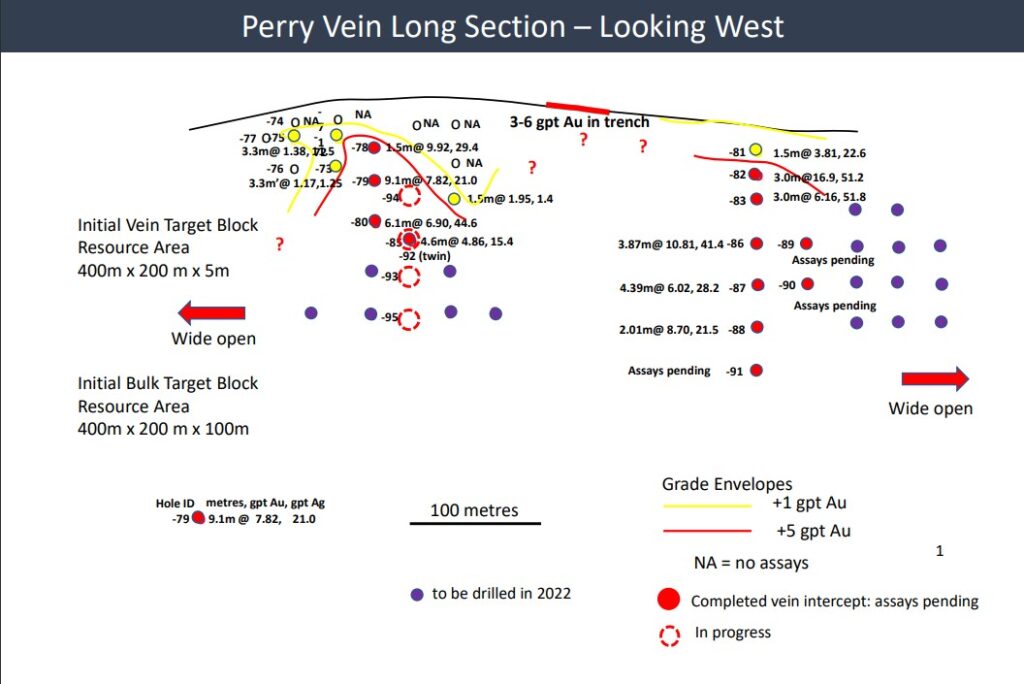 Intercepts in the Shallower Up Dip Portions of the Vein

Results from the 2019 Fall Exploration Program Core drilling  intersected high grades of gold-silver mineralization along strike to the north from historic high-grade underground production on the Philadelphia vein as follows: 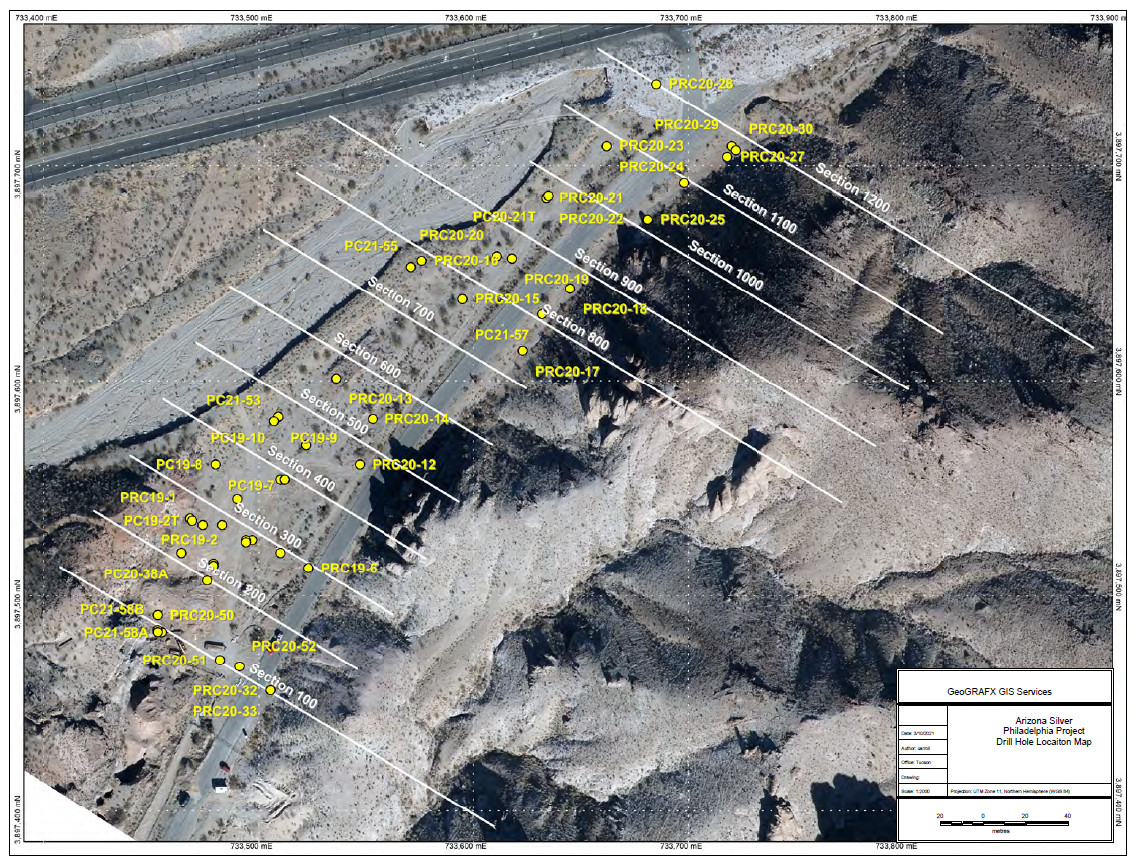 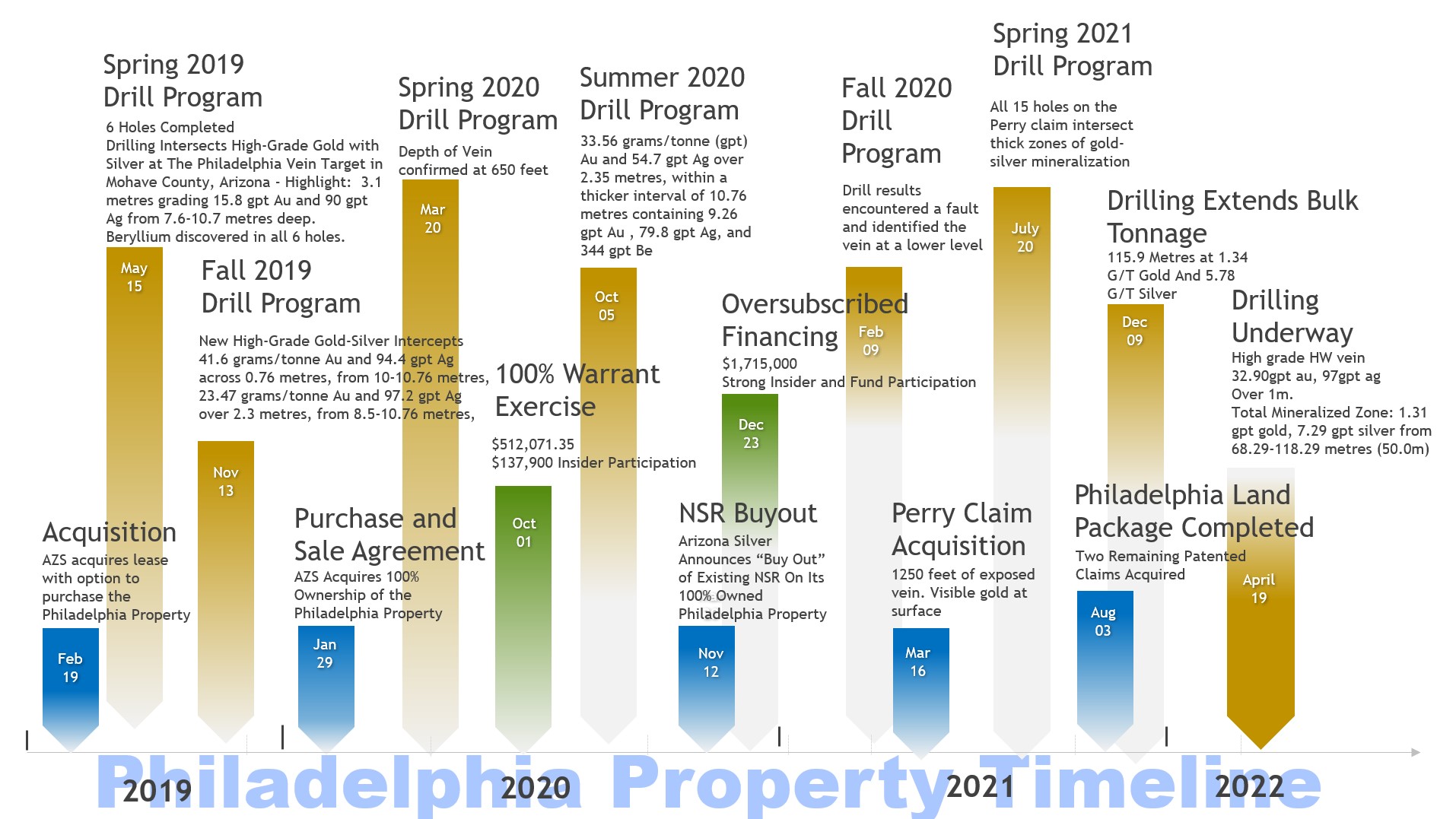 The Philadelphia Property is located in Mohave County, in northwestern Arizona.  The region is home to the Oatman Mining District, which has produced over 2.5 million ounces of gold from high-grade veins from underground mining. It is currently the location of active gold mining operations by Northern Vertex at the Moss Mine open pit heap leach operation, and by Aura Resources at the Gold Road underground mine and agitation leach operation. The Philadelphia property is located approximately 6 miles from the Moss Mine and 10 miles from the Gold Road mine.

On Jan. 29, 2020 Arizona Silver Exploration Inc. announced that it had entered into a purchase and sale agreement covering the 11 unpatented mining claims currently covered under a lease with option to purchase agreement on the Philadelphia project.

On November 12, 2020 the Company announced that it has bought out the existing 1% NSR on the Philadelphia property.

The Philadelphia property, now comprised of 30 claims, is 100% owned by Arizona Silver Exploration, and the property is now free of all financial obligations. 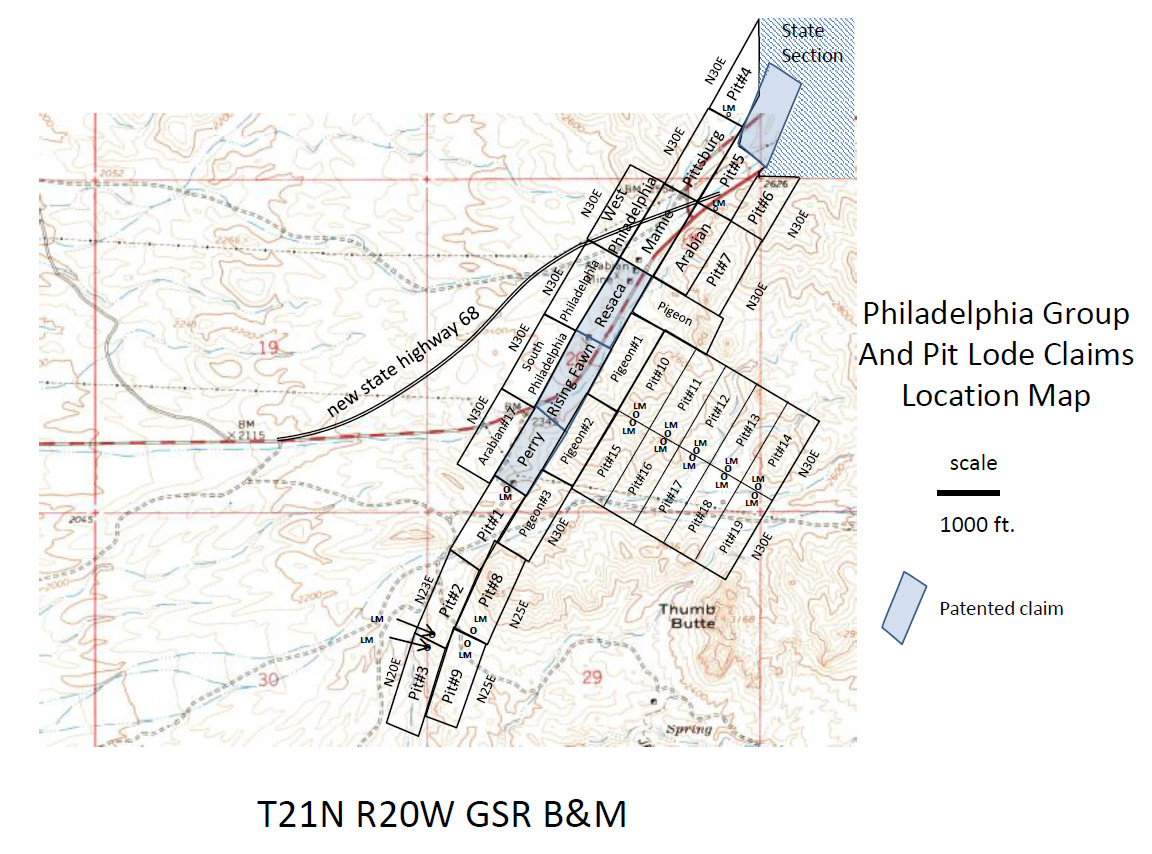 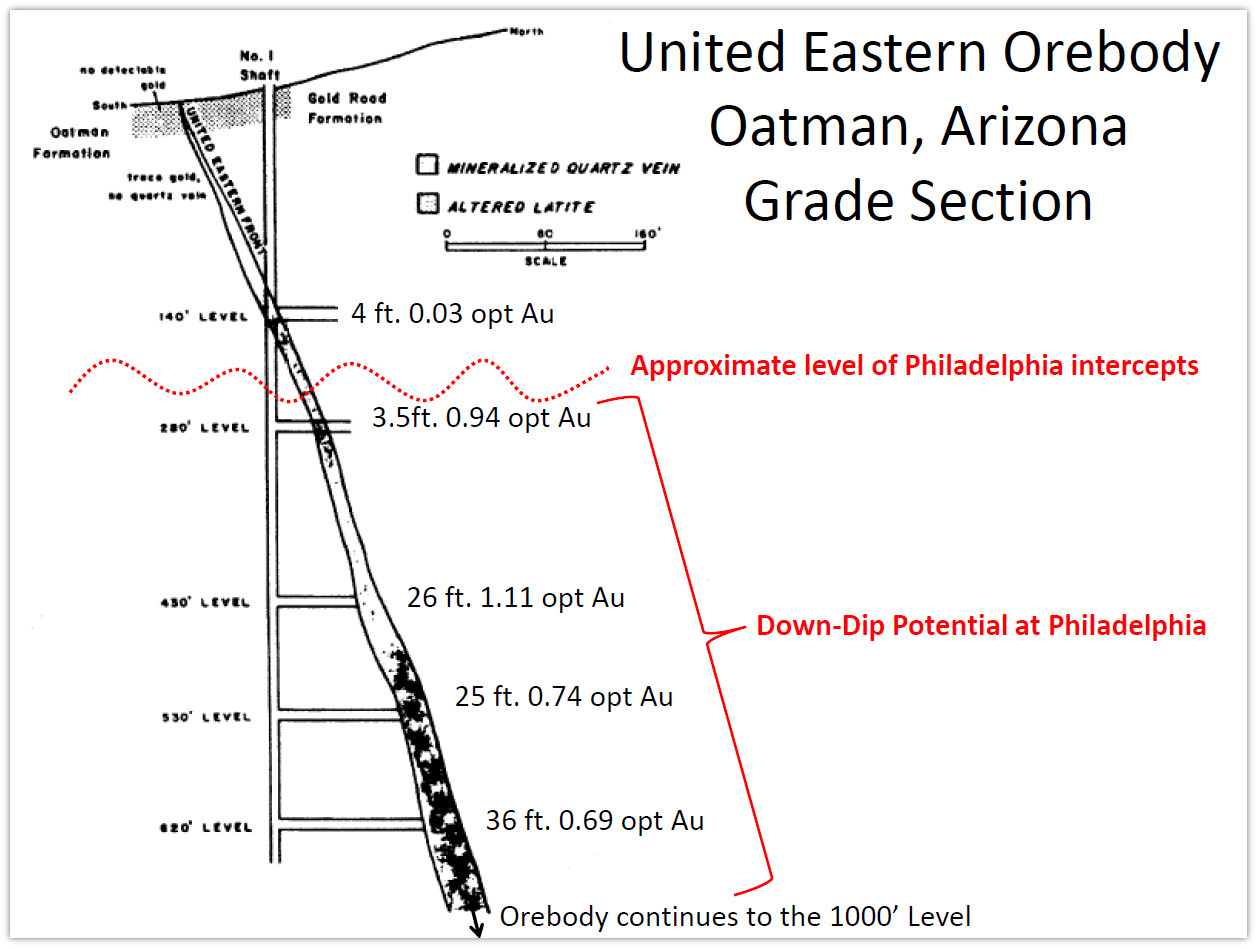 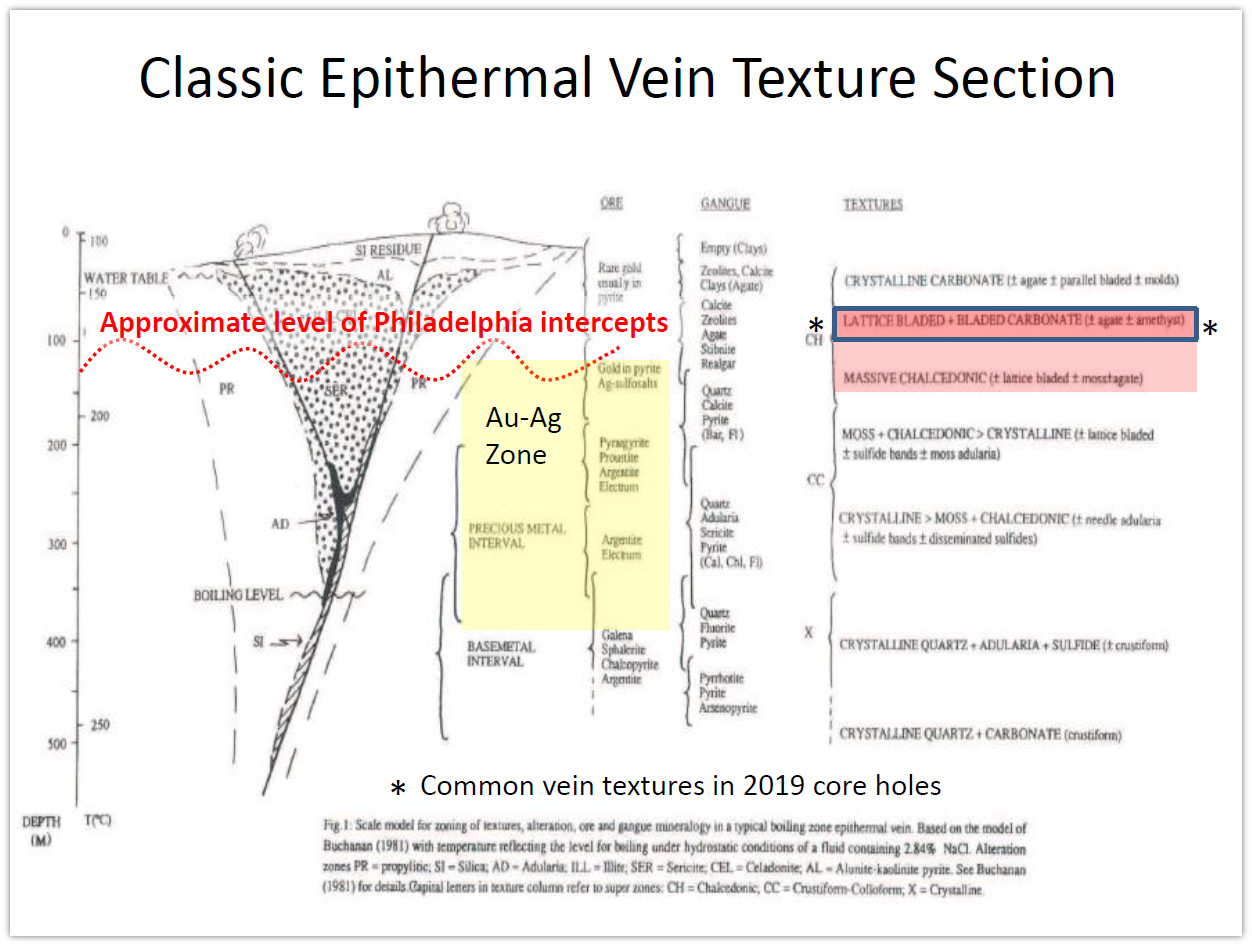 The Gold Road Mine in the Oatman Mining District 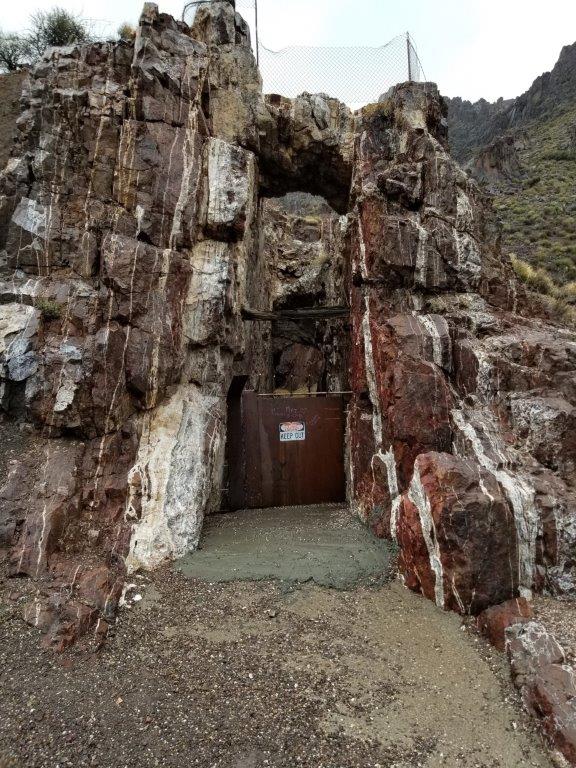 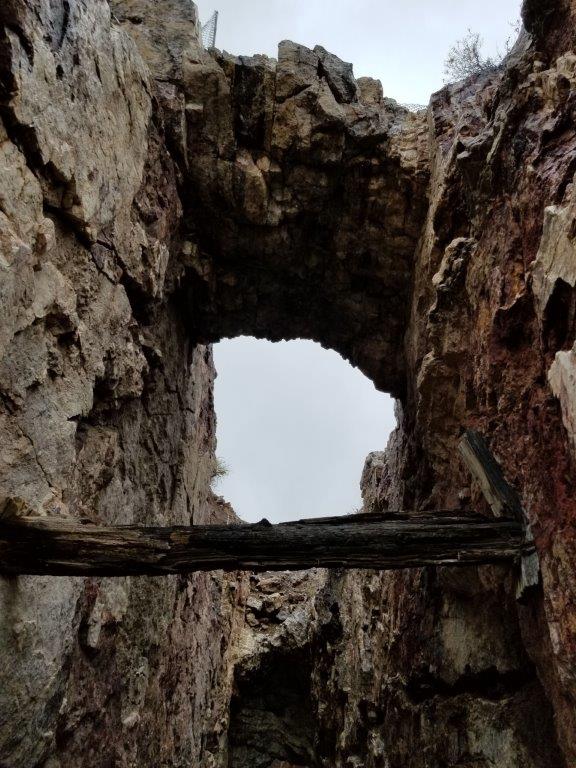 The Arabian-Philadelphia mine was initially developed around the turn of 19th century. By 1915 several shafts had been developed, the principal one being the Phialdelphia#2 shaft, located on the leased claim group, which was developed initially to the 300-ft. level down the inclined shaft. Old reports by mining engineers state that the mine ramped up to a steady production rate of 50 tons per day for five years, mining primarily one large stope between the 100 and 300-ft levels, with material being hauled to the Katherine Mill which was located a distance of 8 miles to the northwest. By the late 1930s the shaft had been deepened to the 500 ft. level, where diamond drilling was conducted to test the vein below the 500-ft. level. The vein was reported intersected down to the 700-ft. level with no apparent change in the grade or thickness of the vein. Production records are inconsistent, but the mine apparently produced between 50,000-75,000 tons at an average grade of 0.3-0.79 opt (10-27 gpt) Au. Silver production grades were not recorded, but more recent but still historical sampling in the Philadelphia#2 shaft demonstrates an average grade of 12.25 opt (420 gpt) Ag accompanying an average gold grade of 0.341 opt (11.69 gpt) Au, for a combined gold equivalent grade of 0.485 opt (16.63 gpt) Au(eq). Historical production grades may be in gold equivalents, as they were reported in USD/ton when the gold price was US$20/ounce and silver price was US$0.50/ounce.

The mine operated intermittently until 1941 when it was closed by the War Order Act, which closed all non-essential mines in the US in order to focus resources on supporting the World War II effort. The mine reportedly produced about 35 gallons per minute of water, and flooded to approximately the 100 level during the shut-down in the 1940s. It has never been dewatered.

A second shaft (Philadelphia #1) was sunk on the vein about 300 feet north of the Philadelphia#2 shaft and went initially to the 90 ft. level only, and later deepened to the 120-ft. level, where it encountered water. Drifting south to the Philadelphia #2 shaft and northward about 150 ft from this shaft was reportedly done entirely in the vein, with grades reported up to $20/ton (with gold at a price of $20/ounce this would have been +1 opt (+34 gpt) Au material). One cross-cut across the vein reported showed the high-grade vein was 15 feet (4.5 metres) wide within the mineralized zone that was 40 feet (12.2 metres) wide. Very little development beyond the 90-120 ft. level drift was done.

The high-grade vein is hosted by the Arabian Fault, a NNE-trending fault that may be a cross-over fault between two prominent WNW-trending faults. The Arabian Fault is concave to the east. The vein dips at 55-60 degrees to the east and is localized on a rhyolite dike which was intruded into the fault that separates megacrystic granite in the footwall of the faults from flow-banded rhyolite and tuffs in the hanging wall of the fault. Alteration in the footwall is strongly propylitic and alteration in the hanging wall is illitic. This is similar to alteration in the Oatman gold deposits. Silicification is dominant in the immediate vicinity of the high-grade vein. Lower grade gold (and silver) carries into both the hanging wall and footwall for distances up to +5 metres each.

Land Status and Permitting The unpatented lode mining claims are located on BLM-administered public lands. An introductory meeting was held with the local BLM office in Kingman, Arizona where the BLM was introduced to the Company’s presence and the Company’s plans to do an initial drill test for the continuity of high grade northward from the old production stope towards the Philadelphia#1 shaft. Surface disturbance will be minimal (<0.1 acres), which falls well within the 5-acre exclusion for a Notice of Intent permit. An initial Notice of Intent will be filed with the BLM before the end of February with the expectation that we will have a permit to drill and reclamation bond in place with the BLM by early April, Arizona Department of Water Quality permits in place, and a drilling contractor lined up by mid-April.

Exploration Plan The current plan is to drill a fence of 5-6 reverse circulation (“RC”) holes between the Philadelphia#1 and Philadelphia #2 shafts to test the continuity of the high-grade vein between these two shafts and down to a depth of about 150 meters. Success in this initial effort will require additional drilling, mostly with core, to continue to test the strike and dip extensions of the vein. Greg Hahn, President and CEO and a Certified Professional Geologist (#7122) is the Qualified Person under NI43-101 responsible for preparing and reviewing the data contained in this summary. 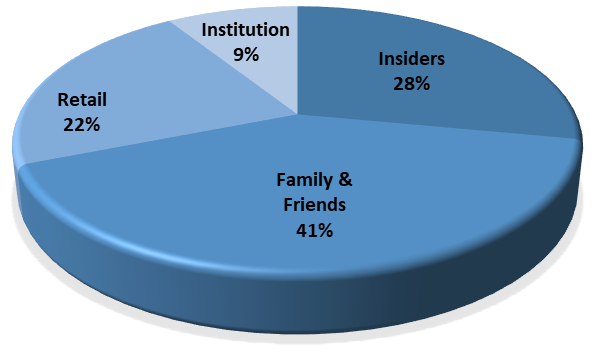