We at Arizona Silver can celebrate the progress we made in 2021. This newsletter highlights our accomplishments and signals to shareholders our planned activities going forward.

Our Company has four properties in Arizona but investors are focusing on the exciting results emerging from our Philadelphia project. We have discovered gold in multiple zones and look forward to drilling the depth extent and linkages between those zones. Importantly we have demonstrated potentially economic grades, not only in the primary vein target but in the surrounding rocks.

The following information tracks the property from north to south. We now control the entire 3 km. strike length but that is a recent development. Prior to the latest agreement we could only drill on the claims we owned or leased at the time.

Early in 2021 we drilled multiple high-grade holes at the north end of the property on the Mamie claim. Despite the high grades, the vein did not persist below 100 metres. The next two claims to the south of these intercepts and along the strike of the vein are the Resaca and Rising Fawn patented claims.  These claims accounted for approximately 40,000 ounces of gold production at a grade of 0.4 oz/ton. We negotiated on these claims for over two years and in August 2021 announced a lease agreement. Exploration can now proceed. 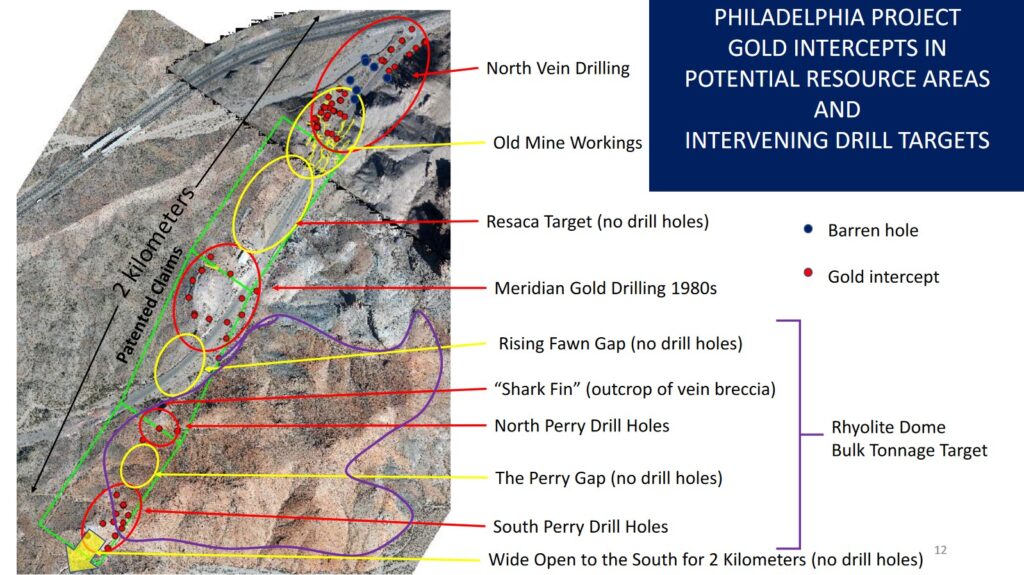 At the southern end of the Rising Fawn claim is a prominent outcrop of brecciated quartz vein we refer to as the “Shark Fin”. This prominent, yet undrilled feature is part of the target zone. Our first fence of holes in the upcoming core drilling campaign will test this feature. 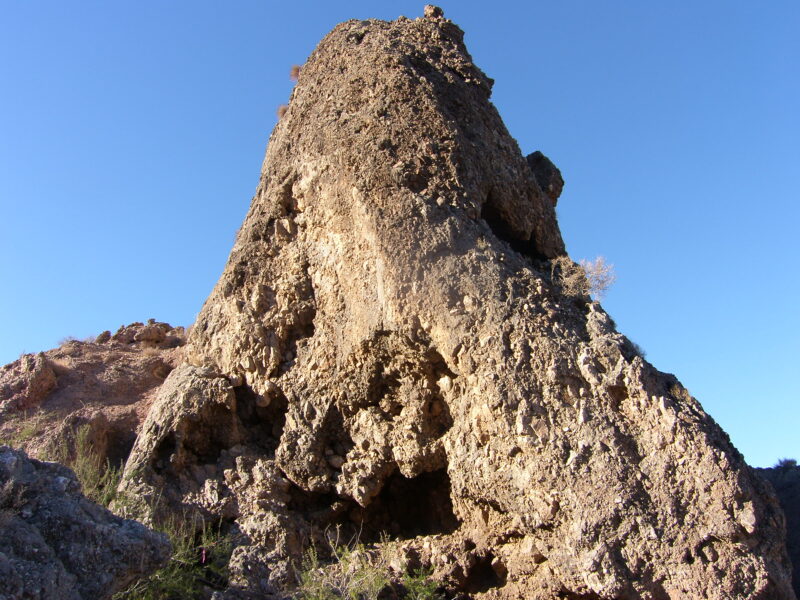 We negotiated an agreement on the third patented claim in line to the south, the Perry claim earlier in the year. Mid year we secured a reverse circulation drill rig to test the Perry vein, a continuation of the vein system exposed and tested to the north.  Sampling of the vein had indicated gold was present but textures suggested we were above the boiling zone where gold and quartz would most likely have precipitated.  The target shows quartz vein breccia across an excellent width of 10-15 metres, a width that made it a compelling target.

We drilled a fence of three holes about 50 metres south of the Shark Fin. One of the holes returned a vein intercept of 3 meters at 16.9 grams per tonne gold within a broad zone of stockwork low-grade gold mineralization.  The rig then moved about 300 metres further south on the Perry claim to drill several fences of holes across the target zone. The terrain between the two areas was inaccessible at the time due to terrain challenges. All holes intersected gold at the location of the vein. Above and below the vein was an envelope of iron staining, clay alteration and stockwork quartz. Assays from both the vein and the altered rock showed increasing thickness and gold grades with depth.

Drill holes PRC21-80 and PRC21-85, our deepest holes of this program intersected both the vein and low-grade mineralization over total drill intercepts of +100 metres. The low-grade envelope is +1 gram per tonne gold, a grade that is amenable to mining by open pit in numerous bulk tonnage operations. Importantly, the mineralization is open in all directions. We refer to the 300 metre long gap between the two drill sections as the “Gap Zone’. 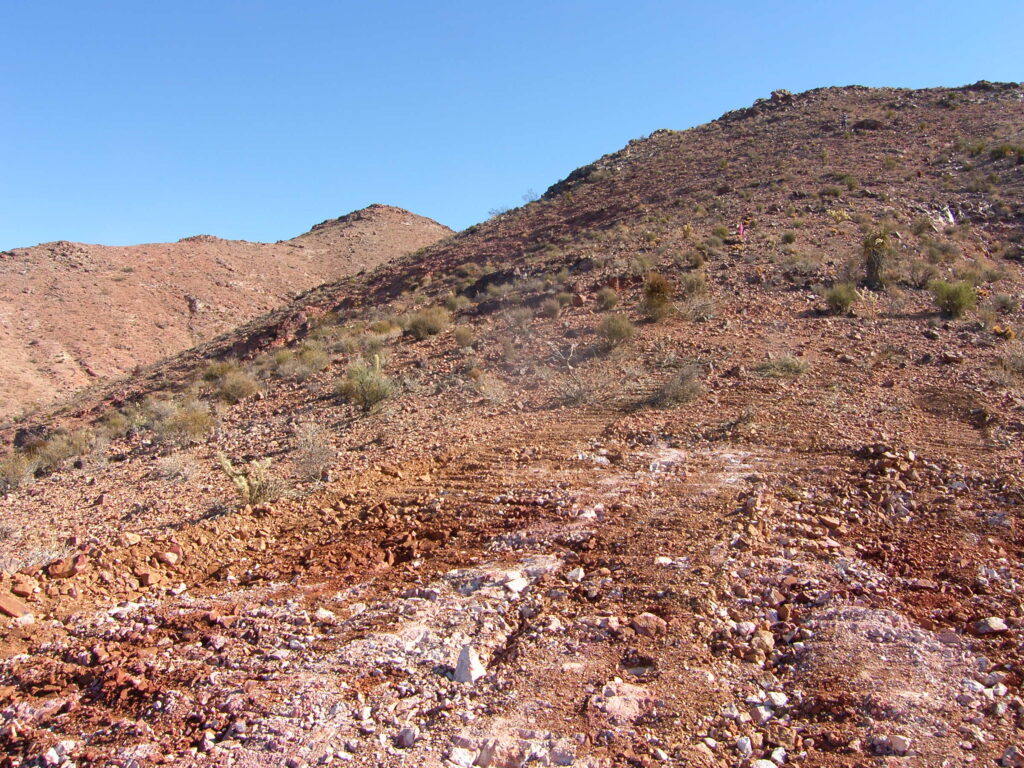 The Arizona Silver website includes a geological model to explain our interpretation of how the gold is emplaced and its relationship to a feature known as the rhyolite flow dome. The photo above shows the red (hydrothermally altered) rocks characteristic of that feature.  Our interpretation of the dome is that it potentially acted as a cap (over 50 metres thick) above the gold (“boiling zone’) by 100 metres. Based on our modeling, deeper drilling is expected to generate intercepts that are both higher grade and thicker.

The Company is anxious to resume drilling, not just on the Gap Zone, but on the entire strike length up to and including the Shark Fin and Rising Fawn areas. During a December site visit the message was “Mike, this project is a no-brainer – the Company simply has to drill and the results will come. Get on to it.” Indeed, we have established multiple gold bearing zones that simply need to be linked with drilling. Given the 3000 metre length of the vein system as we know it, and the low-grade envelope demonstrated on the Perry claim, the project offers significant tonnage potential. Drilling is targeted to resume on February 1, 2022.

Our three other properties remain under care and maintenance. A drilling permit with the BLM at the Silverton Property allows for 12 holes. It has been approved and bonded. This property has large scale potential, being compared to the Long Canyon gold deposit currently in operation by Newmont.

The Ramsey Property is permitted for 8 more holes. Drilling pads are complete on the patented ground.  Ramsey has shown good silver values in the holes completed to date and clearly warrants much more drilling. We believe we have just scratched the surface of this opportunity.

The Sycamore Canyon Property has tried our patience for sure due to permitting delays. I hope to share news in Q1-2022 on permitting developments.

In summary, we remain committed to Philadelphia simply because it has shown the highest value to shareholders, with our results speaking for themselves. Please stay informed by referring to our website as we update it regularly. I always enjoy the phone calls from you. Check out https://arizonasilverexploration.com/stockinformation/

From our team to you, have a safe, healthy and prosperous 2022!